After a packed summer of sailing, we had developed an extensive snag list to be worked on during Joint Venture’s time ashore. From November 2016 to March 2017 we spent every other weekend working on the boat and the result at the end is that Joint Venture feels like a different boat.

Some of the big, meaty, expensive items had been replaced by the previous owners; the fact that the engine, the sails, the anchor windlass etc. were new, was a real attraction when buying her. However, it seems like the great expense of these items had drained the enthusiasm from those owners and lots of the running maintenance had fallen by the wayside. Some of these things included;

– There was a big hole in the anchor locker, meaning that water was running through into the fore cabin.

– The fresh water in the boat was not working as it should, our tea tasted like oil!

And generally the boat was really dirty and needed a deep clean.

In this entry, we’ll take you through all of the elements we worked on over the four months that Joint Venture was out of the water in Dartmouth, Devon. You’ll see some of the results that we achieved and we’ll share what we learnt.

Josh’s dad joined the boat for the sail round from Brixham to Dartmouth. Despite the rain we had a good sail and it was great to finally get him on board, the old sea dog who sparked the interest in sailing nearly fifteen years ago. Although we had plenty of wind, the boat just didn’t want to pick up any speed – a combination of a weed encased hull and a baggy rigging. 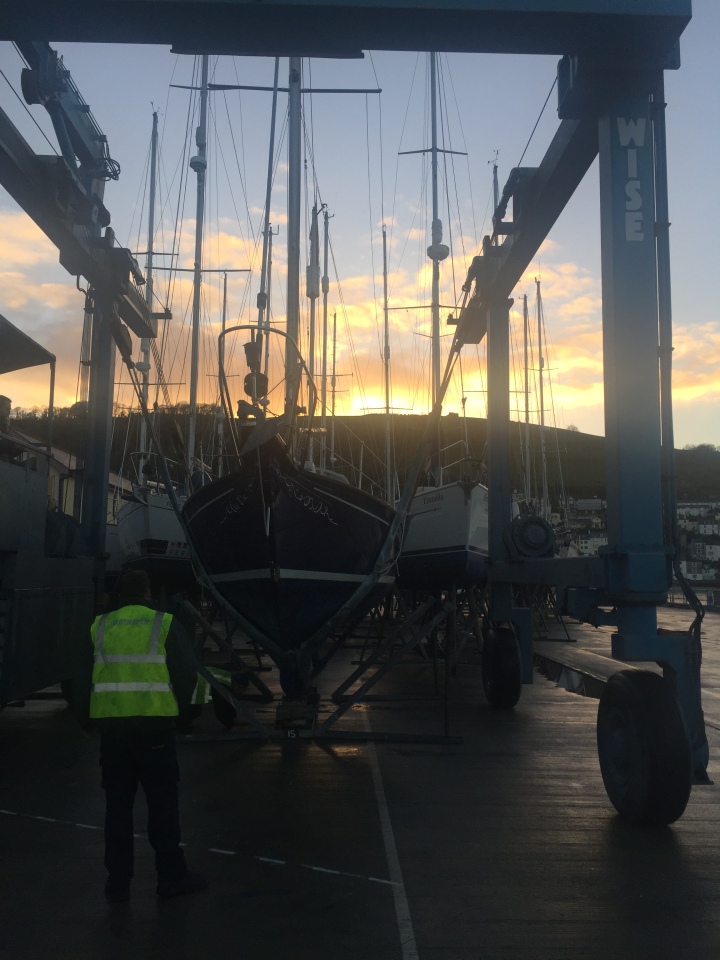 Our first job once the boat was secure was to remove everything. All of our wet weather gear and the soft furnishings were damp, this was perfect chance to wash them and leave them somewhere warm and dry. Fortunately, Josh has a spare room in Brixham which
quickly became the winter store.

As the weather was so wet and windy throughout November and December, we decided to focus on the tasks that we had to complete on the inside of the boat. First up was to service the engine. This is a 2015 Beta 20 and given it is virtually  new, we really wanted to give it some love and attention… we really don’t fancy paying out for a replacement! Given that Craig is godlike when it comes to all things ‘engines’, we were happy to save some money and do the work ourselves. It’s worth noting here that we thought to double check if the Beta’s warranty would be invalidated by us working on the engine ourselves, it wasn’t so we cracked on. A couple of hours later we had the engine fully winterised and serviced. This included: 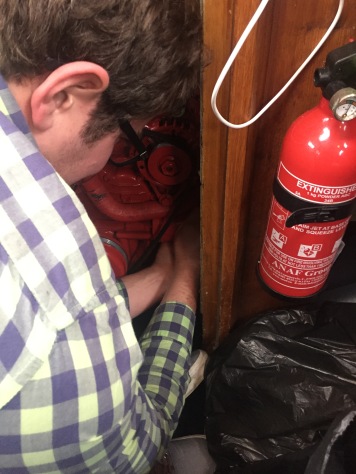 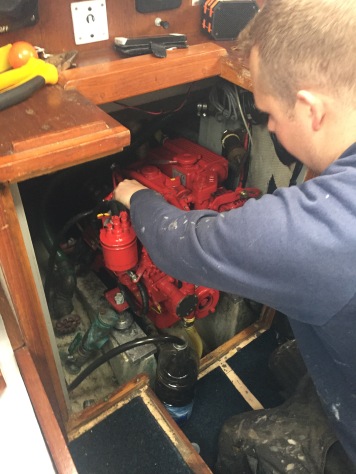 We then set about working on our fresh water, heating and the gaping hole in the anchor locker.

The heating and anchor locker were both a relatively easy fix. The heating onboard is fuelled from the same gas bottle which fuels the stove. The systems was actually working fine and we found the the pipe that carries the hot air had just been severed in the engine bay. So the heating was working fine, it was just warming the engine! We were able to add a new piece of pipe and the boat was toasty in no time. The hole in the anchor locker was actually a problem that we had found in the first few weeks of owning the boat and had been revealed when we decided to take all of the chain out of the locker… just to see how much there was. We had patched over it at the time with a fibre glass repair kit and some wood, adding a plug hole into the center of the locker. Basically, water exits the anchor locker through a pipe and ends up in the bilge, ready to be pumped out. Whilst she was out the water, we took the opportunity to reinforce the patch-up job we had done with some more fibreglass and we’d now put money on the anchor locker being the toughest part of the boat now. If we ever have a big crash, all that will be found of Joint Venture is a super thick anchor locker.

The fresh water system was a slightly tougher proposition. It hadn’t worked right since we had bought the boat… it would be ok for a short time and then our tea would taste like oil. By the time Joint Venture was craned out of the water, we had resorted to buying bottled water and refilling them when we could, so empty water bottles were scattered throughout the boat and had become an irritation.

The way fresh water works on Joint Venture is not complex. A pipe runs from the water fill point, to a flexible water tank located in the bilge under the saloon floor and the water is then lifted to the taps by a manual pump. In the end we decided to take everything out, new pipes, new tank, and start from scratch. The biggest challenge was the fill pipe that ran through the engine bay, it was fun and games getting that out and then even harder installing the replacement. Especially for Craig, he grew used to squeezing into the port side locker and spending time in there seems to bring him great comfort. If he ever goes missing, he can always be found hiding out in there.

Replacing the entire system turned out to be the right solution, as the old fill pipe had been installed next to the prop shaft… this had worn away at the pipe, hence the oily taste. Further to that, the pipework was filthy inside and really shouldn’t have come into contact with drinking water!

Once the work inside the boat had been completed and the interior given a thorough cleaning, we moved outside.

We used International UNO paint, it went on well and it only needs one coat. We felt one coat was beneficial because the hull had clearly had many seasons of anti-foul without being completely stripped back. So this is our job next year!

The darker anti-foul looked much better than the lighter blue that was previously used but the real difference came when we painted the white plimsoll line. As you can see from the ‘before’ picture, this was a wobbly, grubby line. We managed to get the line nice and straight and painted it in a clean glossy white. We hadn’t realised the difference until we compared these pictures!

Once the hull painting was finished, we set about cleaning and polishing the deck and the hull. Probably the most satisfying part of the process was jet washing all of the teak around the boat. This wood was holding dirt from the 80’s! We’ve included a picture below that shows the incredible difference that this made… it’s x-rated jet wash porn. After a few months of being ashore, we found that the winches were not moving too smooth anymore (lesson learnt – cover them!). So we took them apart to find the grease had mixed with salt to form a sticky paste. A clean up with some diesel and applying some new winch grease had them turning perfectly in no time.

To finish off the winter maintenance, we had riggers aboard to re-tune the rig and electricians in to replace the battery charger which had given up during the time ashore. Finally, we replaced our manual bilge pump with a Gusher Titan. According to our online research, the Gusher Titan is superior because it is an all plastic unit, not affected by corrosion or expansion. So far, it is working like a dream.

All in all it was a successful time ashore, Joint Venture is in great condition and the first sail of the new season had us hit a high of 8.6 knots!

We are now looking forward to seeing what the 2017/18 season has in store for us.